Yin Yang Yo! Wiki
Register
Don't have an account?
Sign In
Advertisement
in: Characters, Woo Foo Army, Heroes,
and 7 more

Rabbit (50% Panda because of Master Yo)

Woo Foo Dojo
Are you trying to tell us that was the training exercise?''' -Yang, Dojo, Oh No!

Yang is the deuteragonist of Yin Yang Yo!

Yang is a blue rabbit with purple eyes like his father, Master Yo. His main clothing is a white training shirt with a gray stripe.

Yang is a naive yet hyperactive and occasionally violent rabbit; despite not showing it, he really cares about Yin and Master Yo. He becomes a nicer person in the current season due to the events in the episode "Deja Foo", where Yin and Master Yo were killed in an alternate reality due to his mean actions. Unlike his sister, he isn't very intelligent but can occasionally come up with a good idea. In "Doomed to Repeat It", he says that he does learn stuff, but he doesn't want Master Yo to know that, so that he could get away with more; in fact, if he is willing to think, he is able to escape traps/situations more often (unless he wanted to be trapped/captured just so he could fight some more). This is shown in episodes like "Brain Drain" and "Stuck". He can also dodge things without trying or thinking. He has also shown that he can put things together easily, sometimes even before Yin, as seen in the episode "Who Knows What Evil Lurks" when he knew that there was a spy for the Night Master; unfortunately, the two of them fought over each other's past mistakes. In the episode Disapp-Eared, it was shown that if he is willing to study, he can learn new things in just a minute. He also has a keen sense for telling when people are evil. In the episode "Touchy Feelings", it was shown that Yang keeps his true feelings underneath all his other emotions (his biggest emotion being love, and this is revealed when his love-bunny towers over the city). He is also very clever when he wants to be, as seen in the episode "Inconvenient Tooth" when he outsmarts Carl using deception. Sometimes, instead of just leaping into action without thinking, he will think about what would be the best thing to use against an enemy, as seen in the episode "Yin-Credible!". He is also very good at making up plans. He is also a very good drummer. Yang has also shown that he can disguise his voice. He is also very competitive. In the episode "Old Softie", it is shown that before he finishes saying something, he can come up with different words to say something else and that he has always loved ponies; and in the episode "Dance, Dance Devastation", it is shown that he is a good rapper, dancer, and singer and that he can also speak some Spanish and German. In the episode "Walk in the Woods", it is shown that he can also be very respectful to his elders. He can also be very strategic. It is revealed in Deja Foo Yang is ticklish. He likes clowns but hates mimes. It is revealed in "Mind Games" that he secretly writes poetry when no ones around, he sometimes thinks about painting Lina's toes, and that being wedged in the toilet of a demolished outhouse in front of a dangerously attractive lady is his third biggest fear.

Yang has a lot of catchphrases. His most common ones are "Aw, Pellets!", "Pellets", "This sucks!", and "Aw, hippity hop me hard!". In the episode "Shopping Sprawl", he also says "Curse you, Math,"Thank you, Math" and "two words 'Who and cares'". Also one of his most used battle cries is "Chee Hoo Waa!". He, Master Yo, and Yin have a battle cry they say together; it is "Yin, Yang, Yo! Let's go!".

Yang is training to master the Martial Arts side of Woo Foo to defeat all opponents who challenge him and to hit stuff. Yang and his sister, Yin, train under Master Yo to master Woo Foo and assure to the world that it is not foolish. He is currently at the second level of Woo Foo. In "Deja Foo", Yang decided develop his kindness and begin a secret quest to collect and dispose. His earliest shown memories are of writing the story of "Super Yangy" at age 4. In "Wubble In Paradise" which in the end, embarrased him infront of Yin.

In the episode "Old School", Kraggler tricks Yin and Yang to become older. With the help of the Chronologicum he becomes a teenager, a middle-aged man and an old man. As a teenager Yang has become much stronger. He also has a tattoo (the tattoo is similar to the Yin Yang symbol). As a middle-aged man he has lost his muscles and his voice becomes lower pitched. And as an old man he wears the same white shirt as 11-year old Yang, has grown a beard, has fake teeth and walks with a cane.

Yang is currently a level 2 Woo hoo Warrior. His main weapon is a magical bamboo sword. The sword can transform into a boomerang ("Yang-a-Rang"), a bo staff (Bamboo Staff), and a pair of nunchucks ("Foo Chucks"). He focuses on Martial Arts powers and can perform various attacks ("Paws of Pain", "Foonado", etc). In the episode "Night Fall", Yang shows that he is also able to use Yang-Cinerate. As the series progresses, instead of only using the Martial Arts side of Woo Foo, he has been using the Mystic side of Woo Foo more often. In the episode "Disapp-Eared", it was shown that he is starting to display an interest in the Mystic side of Woo Foo. He is also a Clown-Fu master. 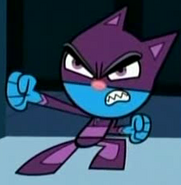 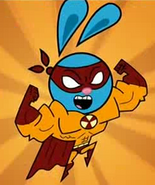 Super Yangy - In "Wubble in Paradise", it is revealed that when Yang was younger he wrote a book where he was a hero Super Yangy. As Super Yangy, Yang is much stronger. He wears an orange and red suit (originaly pink and yellow but he thought it was meant for girls). He can also bend anything to his will when he is in the book.

Yangst - Yang also briefly became Yangst in "Wonder Tweens Go!" (a parody of Dark Claw). He didn't have any new powers. The only difference is that Yangst keeps talking about his "dark past". Yangst is equipped with Y-shaped, explosive darts.

Toon Yang - In An Inconvenient Tooth, when Yang refused to visit the dentist and starts having problems with his teeth, he grows two buckteeth, a cottontail, and loses his training vest reducing him to a Looney Tunes-esque character. In this form, he acts like Bugs Bunny and is wackier than his normal form. This is called the "Wild Hare Tooth Syndrome".

Realistic Yang - When Yang dived into Carl's portal to earth in Yin Yang You!, he briefly became a realistic bunny. 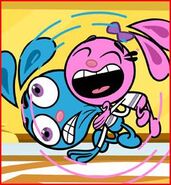 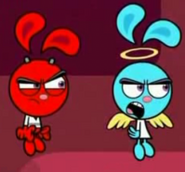 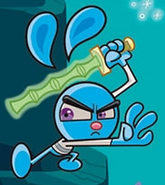 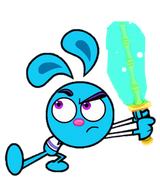 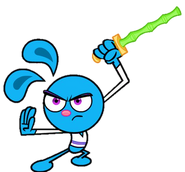 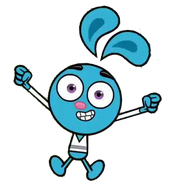 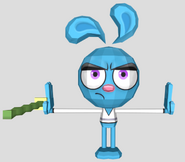