Ultimoose is the ultimate Night Master lackey. He's tough as nails (despite his shortness), a master of Ultimate Moose Fighting, and really, REALLY dumb. In spite of his strength, he's defeated by Master Yo and fails to work for the Night Master in his first appearance. Also, as an insult, he likes to call people little girls or ladies. He tends to refer to himself in the third person. His outfit and hairstyle are similar to that of the Marvel Comics superhero Wonder Man. He became the new Night Master in "Deja Foo", calling himself the Night Mooster.

He became regular Ultimoose again after Yang reversed time, found the Amnesulet first, and was aided by the other villains to defeat him. As of episode "Welcome To The Dark Tomorrow", he has joined the League of Evil.

Ultimoose is a man in the stereotypical meaning of the term, being brash and short sighted with limited intelligence. Training and muscle-obsessed with an ego to boot, he frequently refers to himself in third person. His catchphrase is "HOO HA HOO!", though he trained Yang and his friends in self control by saying "HOO HA!" and hits anyone who finishes it, mainly Dave.

Despite his lack of brain juice, he possess considerable skill in martial arts. As a master of Ultimate Moose Fighting, he is quite strong, nowhere near Master Yo`s level, but powerful enough to take on Yin & Yang several times during season 1.

His antlers have various uses such as a way to comunnicate with his ultimate henchmen, a cannon, etc.

As The Night Mooster, He has energy blast color similar to Carl's 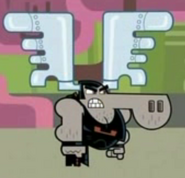 Ultimoose Card
Add a photo to this gallery

Retrieved from "https://yinyangyo.fandom.com/wiki/Ultimoose?oldid=18958"
Community content is available under CC-BY-SA unless otherwise noted.