The Chung Pow Kitties (also known as the CPK) are a gang of villains and a rock star band.

The Chung Pow Kitties are little, adorable kittens at first glance, but they are really evil and heartless ninjas. They usually wear red, purple and green dresses; however, unlike many other characters in the show, they have many other clothes: besides their dresses, they also have rock star costumes, costumes they use on Broadway, ninja clothes, and glasses. It is unknown where they hold their weapons.

At first they seem innocent and cute, but in reality they have no mercy; however, once they see a ball of yarn or a dish of cat food - even in battle - they instantly revert to adorable balls of fur. They are also world famous as rock stars and stage actors, even though all they say is "meow": on stage they show no signs of evil. Yang was once their biggest fan, but the CPK betrayed him and they have been bitter rivals ever since. They are also shown to be very obstinate, constantly trying to break into the Woo Foo Armory without giving up.

The CPK are three very fast kitties. Their weapons are...

All of their status and history is unknown so it's hard to know their story.

In "Cat Smash Fever" the CPK broke up due to the rumors about each other; each original member then started their own band. Kitty's was called the "Nine-Inch Tails", consisting of herself and 2 new girls with rockstar hairstyles; the new girls used guitars to fight. Ashley's band was the "Black-Eyed CPK". It's members were her and 2 male cats with sunglasses. One of them was a capable hand-to-hand fighter. Bella's new band was "CPK revisited": she formed the band with a dog and a monkey; they all used hammers. The original CPK got back together after seeing a video tribute dedicated to them. 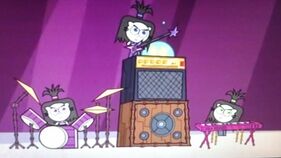 Add a photo to this gallery
Retrieved from "https://yinyangyo.fandom.com/wiki/The_Chung_Pow_Kitties?oldid=13059"
Community content is available under CC-BY-SA unless otherwise noted.