Night Master, Billed as a "Dark Overlord In An Evil Class All By Himself", the Night Master is the main antagonist of the series' first season. He is a very powerful and dangerous foe who was responsible for the near extinction of Woo Foo by eliminating all of the Woo Foo knights except for Master Yo. The Sensei managed to turn Night Master's army to stone and sent him into hiding for a hundred years, until he tricked Yin and Yang into using Woo Foo in order to free his army. However, Yo's victory came at a cost, as the Night Master used the Amnesulet to make everyone else forget about Woo Foo, making him a laughing stock for using it. The Night Master appears to be a demonic sorcerer bat of some description, and has a liking for gothically ostentatious outfits (although Flaviour keeps trying to make him wear brighter colours). He frequently communicates with his lackeys by using a hologram. He was banished to a dark realm by Coop in the season one finale, but it was said a new Night Master will soon rise to take his place. This turned out to be Eradicus.

He is considered to be the main villain of the first season, even though Carl appeared more than him, which lead many to think that Carl was the main villain. In Pros and Cons it is shown he has an ego. As revealed in The Pecking Order, he is one of an eternal line of Night Masters alongside Eradicus and an unnamed cobra-like woman. His real name (since "Night Master" is a title) has not yet been revealed. Ever since his defeat, the other villains have been developing their evil in an attempt to become the new Night Master. Ultimoose temporarily succeeded in doing so after he found the Amnesulet, but was defeated by Yang and stripped of the title. As is revealed in Shadowcluck, he survived the final battle against Yin, Yang, Yo, and Coop (Night Fall). He sold his army to Eradicus for 13.50 Karchings at a yard sale, presumably outside his new home. At the end of said episode, it also revealed that he was still evil. It's unknown how he escaped the dark dimension he was banished to.

He is a very tall and slim bat. His fur is black and white, and he has red markings around his eyes. He has a long grey moustache and beard. His eyes are normally black, but can glow red. His regular outfit is a black and red cape, something which (to Flaviour's disappointment) he refuses to change. His fingers are pointed, as if they have claws. His teeth are sharp, and his fangs can often be seen even when his mouth is closed.

Sitting in his lair

The Night Master and his lackey, Flaviour 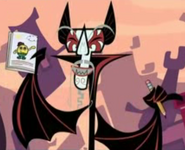