"An Oldie But a Goodie"

About a "Bazillion" years old

The Top of Mount Painful

"Master Yo must have send his students after me. Well if he's going to use youth to defeat me, I'll use age to defeat him!" -Kraggler, An Oldie But a Goodie

Kraggler A gargoyle who is about a "bazillion" years old, Kraggler used to be a great and powerful warrior and Master Yo's archenemy who battled Woo Foo knights when he was younger. However, most people aren't aware of this fact and they generally treat him like a harmless old man. Reduced to a feeble old man, after he broke the Chronologicum, he got the power to drain the youth from anything or give his age to anything. Kraggler is more of a threat and evil when he is young so he needs to write his plans down in case he reverts to his original age. He can return to his young form when he touches something or someone that has youth. It seems that despite his long history of evil, he has shown a desire to live out the rest of his life in peace, though he usually comes out of retirement when people make fun of him for his age. His appearance is also similar to a gargoyle, though for some reason his older version has no legs. 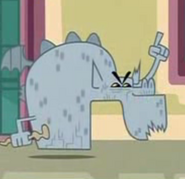